The partnership began when Pure Skills were invited to a creative workshop that was sponsored by Zambia Breweries in conjunction with the Ministry of Arts & Tourism.  The day was filled with learning about design and product development.  With much emphasis on quality over quantity, which holds with Pure Skills ethos. 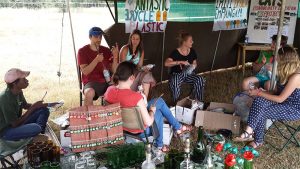 8 of the women attended the workshop and then set to work making earrings, bags, wind chimes and glasses all from recycled Zambia Breweries products.

Mosi Day of Thunder arrives and we meet with the Manja Pamodzi team for a couple of hours training on recycling and an explanation of payment per kilo for the differing recyclables.  The women were provided with safety equipment and high visibility vests.

Later in the day we meet at the Golf Club where the festival is being held to get our wrist bands and set up our area in the Conservation and Tourism (CATS) stand along with the CATS and African Impact Team.

The women all very excited to be there cleaned up and recycled as the festival progressed dancing along to the music as they went.  For safety reasons the team left as dusk fell.

The festival saw huge amounts of people descend into Livingstone for a day of music, dancing and Mosi. But, as with any sizeable event, there is an aftermath and it is not always pretty.

At 07:00 hours on Sunday, while most of Livingstone remained in bed nursing sore heads, we arrived at the festival site to be greeted by the apocalyptic sight of great swathes of litter.

Too stunned to even take photos of the carnage, we wondered how on earth we were going to tackle this magnitude of waste.

Open-mouthed in shock, I turned to my husband and said we needed more bodies to tackle this. But, there was a lack of willing/available hands.

Pure Skills’ women’s club were already hard at work – gathering, sorting and separating piles of trash inside the grounds. But, there was another event at the venue and the distraught organiser asked us to focus our efforts on the exterior.

By this stage I had attracted the attention of the local children who were curious as to what we were up to and why.

I explained we were going to take away the rubbish and turn it into something else. To my amazement the children offered to help – despite the fact it would be unpaid and voluntary.

So, leaving the women’s club to sort and gather waste inside, I set off with 30-odd children in tow to clean outside the fenced area.

I was absolutely amazed at the speed and zeal of the children and, in no time at all, we had the area looking respectable.

Working in teams, the children combed the area, then sorted the waste into different sacks ready to be baled together for recycling later.

Over five hours, some children came and went, but a core bunch stayed with me as we relentlessly cleaned, picked and separated all manner of trash.

And, it was not just litter we sorted. In the process the children found important personal belongings such as credit cards, driving licences and even a passport. All of which they passed over to me as they wanted to get it back to the person who had lost it.

If this is the future of our beloved Zambia then we should be proud of the up- and-coming generation.

These wonderful youngsters worked hard and tirelessly to clean up after a festival, despite the fact they had not contributed to the mess, and were not even eligible to have gone, even if they’d had the resources to do so. 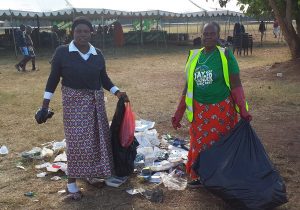 They boosted morale and their questions, laughter and next step suggestions, turned a seemingly impossible task into something enjoyable.